Dancing in the kitchen

It’s been a busy month for us, full of new beginnings for me which is really exciting.

First off I, fairly successfully I think, taught a two hour class at Collegium introducing people to the process of making medievalish turn shoes. This is going to progress into a series of practical workshops getting people actually making some, probably at the new location for joint Southron Gaard practices on Sundays. I’ve done this before of course but before I was sick and I know a lot more about actual medieval shoemaking practice now thanks to Al. 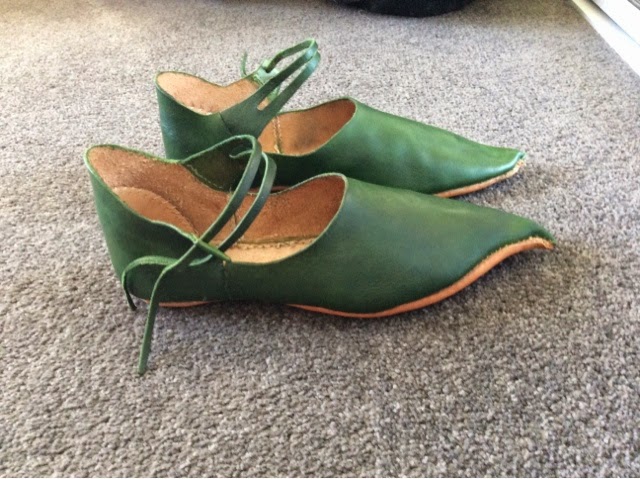 Next I have actually started winding and warping the new loom. It was a bit stumped at first because I had an unknown amount of carpet wool for the warp and the normal method of warping a sectional beam loom is to first wind the warp onto bobbins of X number per section, on this case 16. But I had no way of winding those to a specific measurement and was concerned that I’d end up with not enough. Anyway I’ve been doing it just by measuring onto the warping mill as normal and warping each section from that and it seems to be going ok.
We applied for and have secured a house sitter who will take care of Kiwi and the horses so that we can go to Fimbulwinter in Dunedin next month which is very exciting. We’re taking a couple of days and driving down ourselves which will be just lovely. If all goes well that will make CF a lot easier on Kiwi and us.
I’m on the stewarding team for Canterbury Faire next year, and I’ve recently had an idea about an event that I’d like to run in early summer or maybe spring but as that’s still very much in the works I’ll not go into details yet.
And I’ve been sorting out my armour to get back into SCA combat. Mostly it’s fine but there’s a bit of wear and tear, the bluing on the steel needs re doing and some of the leather, straps etc need upgrading. Nick’s made me a practice sword and has been coaching me in doing blow drills in the dining rom while he cooks. I am feeling it a little in my wrist and shoulder but that will go away as everything gets stronger. So hopefully by the time we head down to Dunedin I will be able to start training.
Finally, we’ve had the landscaping guys here the last couple of days levelling the ground outside the bedroom windows for the new garden and lawn which is REALLY exciting as I’ve been planning that space for years. Now it’s all go and soon I’ll be buying plants which is amazing.