I’ve actually put in my financial etc reports for Spring Thing so I figure I’m overdue to give a report on it. About four weeks out I had a serious attack of life. Life attacks are a known issue in the SCA, they can occur at any time and generally are unavoidable, because if they weren’t we’d avoid them like the plague. Mine was work related, more on that later. Anyway because of it there are a couple of things that weren’t as well prepared as I had intended and I was generally feeling harried.

Then we had a bad case of weather. The weekend before the event was lovely. I think that at some point I’d even walked kiwi in a t-shirt. But early the week before Thing we looked at the weather report and it was bleak, like in snow down to 300 metres or so, southerlies, rain etc. I’d always known that that was a possibility. September is still early spring around here and definitely ski season weather. However postponement would have messed up the plans of the crew coming up from southern Southron Gaard, currently known as Wildmoor, and so we went ahead.

And it was fine. Not the weather so much, that was cold, overcast and in the evening a bit drizzly. But nearly 40 people showed up, and shot at apples, fought, threw stones, bought stuff, hit each other’s heads with something resembling a stuffed sock and roasted freshly shot rabbits over an open fire for dinner.

Some moments were a little chaotic but that happens when you’re really running an event. But the only injury was self inflicted, we didn’t burn down the neighbourhood, and everyone got off-site in a reasonable fashion. I think that I managed to inject a bit of Norseness into the event with my opening ‘law speaking’. More light at the meal would have been good, I don’t know where the candelabra had got to but it really was needed, I need to make a bag with the extras that go on the pavilion when it gets set up.

So that’s it for running events for me for a while. I have new challenges coming up which I expect will call for some life reorganisation. And we’re still hoping to go to 50 year celebrations next year so that will preclude any other major plans.

Below, the bonfire that I made, but we didn’t burn (just a bit of it). 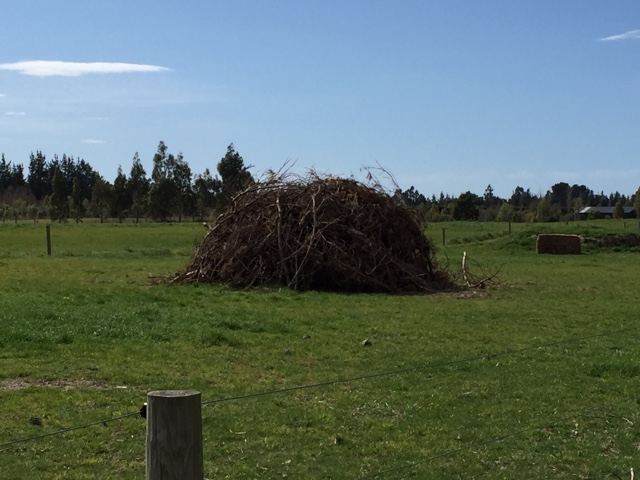