For our 12th Night 2004 celebrations we had planned a Pas d’Armes with as much heraldic splendour in the style of the late 14th – early 15th century, as we could arrange. Sigurd is the leader of the tenants and while the venants are lead by Baron Callum, who of course can use the Southron Gaard baronial arms and regalia, Sigurd needed a tabard for his herald.

I’ve made a number of heraldic tabards and surcoats before but I wanted something that was more correct for the period. So as usual I went looking for some images of period heraldic tabards. 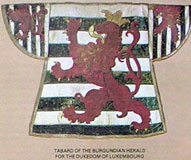 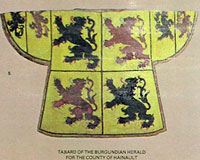 I had already collected these pictures from Ottfried Neubecker’s book Heraldry: sources, symbols and meaning, page 24 – 25. Only the last one has a date on it – 1476 but I really like the shape of the first two and there were several with that basic shape. Moreover they accord well with the shape shown in the images from the Book of the Tournament. 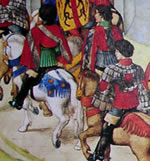 I also had some images from King Rene of Anjou’s Book of the Tournament in Richard Barber and Juliet Barker’s book Tournaments. Here we see the pursuivants for the tournament entering the castle before the tournament judges and behind trumpeters. Many of them are wearing their tabards side on this signifies a pursuivant, as opposed to a King of Arms (thanks to Lord William for that information). 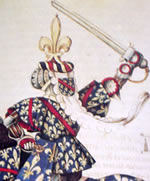 The tabards are very simple but a few things stand out:

The pattern is very simple – its cut in four parts – front, back and two sleeve panels all of which are lined and interlined. The interlining is to give the tabard a little stiffness so that Sigurd’s arms would be cearly visible.

I didn’t have enough red fabric or paint to do an all-over pattern so instead I went for a plain tabard with the arms displayed on a shield shape front and back. The arms are painted on with fabric paints that set with ironing.

This is the small chef that I wrote off last week it has a smal cold shut on the back. It is 500 layers of 1084 / 1084 so the pattern is very subtle.
Sometimes they are just bad . I like everything about this but I got a flaw in the metal so I have cut some stuff up and will try it on the leather table if it fails there perhps the garden shed.
Not pretty yet but ready to harden they will then need a significat amount polished off over th entire surface.
Stitch drilling forks today. I always miss a couple of holes but all good wont take long to file these out. 1 is already sold
Now seeking rehome freshly finished outdoors model with integral bolster with micarta handle. The blade is a 300 layer tight twist.
I have realy enjoyed this one the antler is really nice and It had spent some time on the ground so is a little coloured. the surface was really washed out so I was delighted to sand it back and find something so well suited to the build in there.