Like many costumers who have made Elizabethan costume I have long admired the coronation gown of Elizabeth shown in the surviving panel painting of around 1600. And like many I enjoyed, but questioned, how it was shown in the movie Elizabeth. So for some time I have intended to do some research into the gown and attempt to draw together some of the information that is available about it and perhaps attempt a more accurate presentation of it. 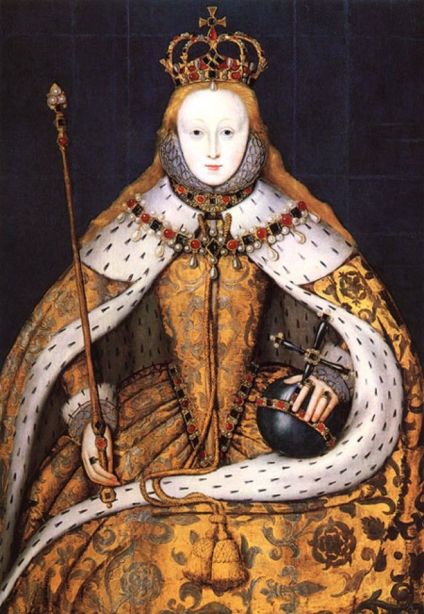 I’m going to begin with the documentary information that I have been able to find and then move onto looking at details from the portrait itself.

Luckily for me a great deal of this work has been done for me already by Janet Arnold in this wonderful book. In fact there is an entire chapter about Elizabeth’s ceremonial garments including this one. Its a bit messed up with details that I’m not terribly interested in so I’m simply going to outline the main points that I garnered from her discussion (mostly pages 52 – 57). I’m also not interested in the mantle at all so I won’t include anything to do with that.

Janet also has the inventory record that pertains to this kirtle in the appendices of this book: page 255:
“[2A] Item one kirtle of the same tissue the traine and skirts furred with powdered Armyons the rest lyned with sarceonet with a paire of bodies and sleeves the same”.

I went in search of a bit more information about kirtles as they can come in a wide range of styles.
Page 120 “Kirtles made for Elizabeth seem to have had fitted bodices cut separately from the skirt with a waist seam.”
“to Walter Fyshe our Taylour… a rounde kirtle with bodies laysed with a lase of blak and russet silke very thicke cutt and turned in double lyned with buckram borderid with buckeram and sarceonett about the skirts lyned with cotton in ye pleites the bodies made of black satten…”

These two quotes I interpret to indicate that:

Of course Patterns of Fashion is an old standard when it comes to 16th century costume. I didn’t find much in here to add except the interesting silk fringing on the lower edge of the petticoat of Pfalzgrafin von Neuberg to protect the folded hem from wear. It would also assist in stiffening the hemline as the buckram edging noted above.

Visual observations from the panel painting

Based on the above we can now make some conclusions about the form of this gown and the appropriate accessories.

Although this started as primarily a research project I am going to try to put these conclusions into practice and create a kirtle much like the Robes of Estate.

This is the small chef that I wrote off last week it has a smal cold shut on the back. It is 500 layers of 1084 / 1084 so the pattern is very subtle.
Sometimes they are just bad . I like everything about this but I got a flaw in the metal so I have cut some stuff up and will try it on the leather table if it fails there perhps the garden shed.
Not pretty yet but ready to harden they will then need a significat amount polished off over th entire surface.
Stitch drilling forks today. I always miss a couple of holes but all good wont take long to file these out. 1 is already sold
Now seeking rehome freshly finished outdoors model with integral bolster with micarta handle. The blade is a 300 layer tight twist.
I have realy enjoyed this one the antler is really nice and It had spent some time on the ground so is a little coloured. the surface was really washed out so I was delighted to sand it back and find something so well suited to the build in there.